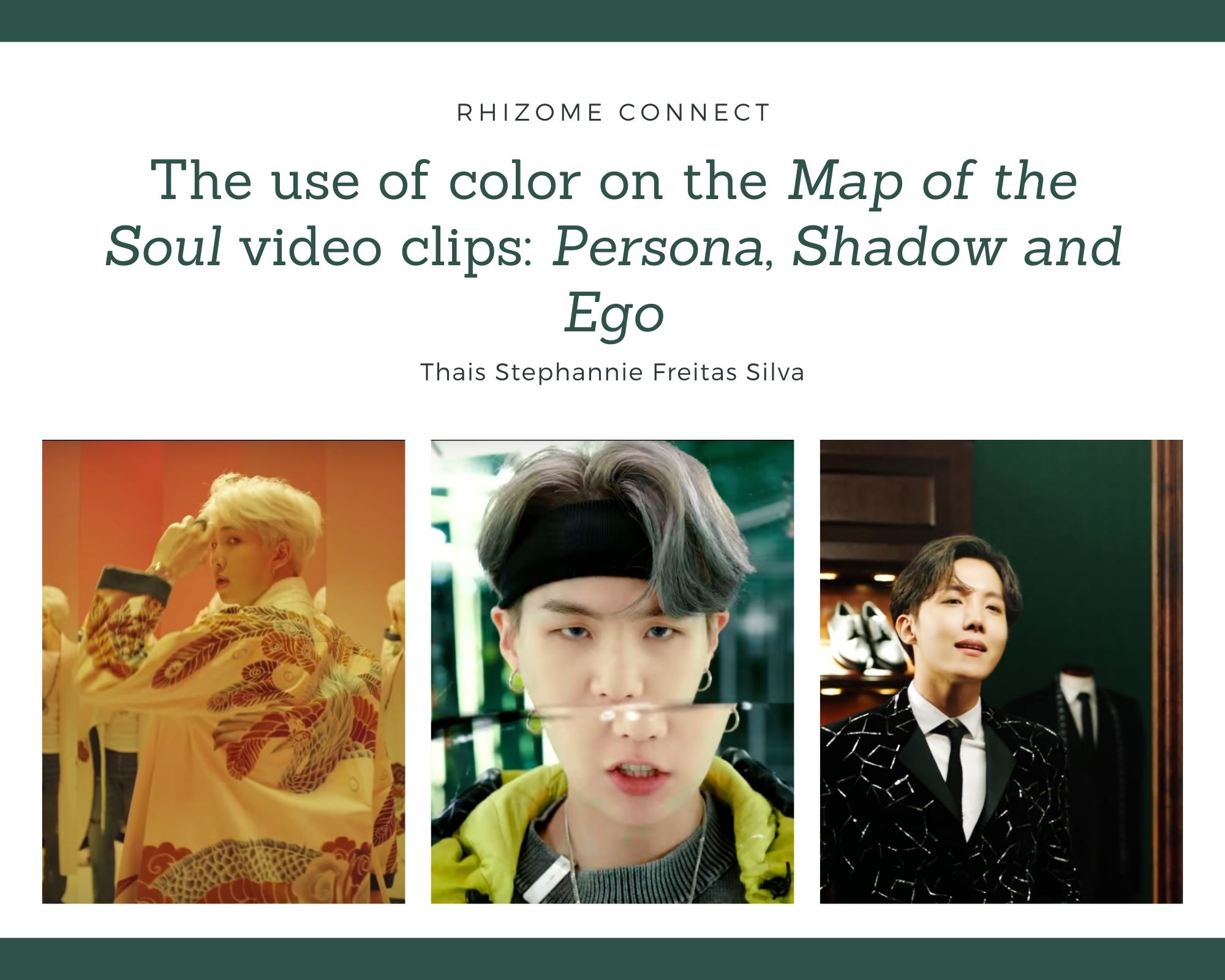 This project was originally presented in a production design class for college. The purpose of the project was to study and analyze the color palette of a piece of media. I decided to analyze the use of colors in all three of the Map of the Soul video clips since they complement and reference each other. For that, I had to study what is the Map of the Soul theory and how color psychology can be applied to it.

What is the Map of The Soul?

According to the psychiatrist Carl Jung, a person’s personality is made of several parts that may act together and influence each other. They are the animus/anima, the ego, the persona, the self, and the shadow. For their last two albums, BTS decided to work with three of these concepts: the persona, the shadow, and the ego. One’s persona can be interpreted as the masks one uses when dealing with the exterior world. How a person behaves at their job or when speaking with a stranger is not their true self, but a mask, since they are restricted by social rules and the desire to be accepted. The shadow is almost the opposite of the persona, as it is everything one tries to hyde or deny about themselves. It is the most emotional and irrational part of the psyche. Finally, the ego is the center of our consciousness, it links the persona and the shadow and is responsible for our sense of identity. All of these aspects together combine into the map of our souls.

What is color psychology and how is it applied to audiovisual media?

Color psychology studies how hues can affect human behavior and emotions. It is widely used on audiovisual media since it helps in telling a story without the viewers being completely aware of it. One can use colors to code a character or evoke emotions from spectators. Lighting, scenery, props, and costumes of a media (may it be a movie, series, or video clips) are all thought out to fit a specific color scheme.

How is color used in the Map of the Soul videos?

In the first scene of the Persona video clip, RM is wearing neutral colors (beige, white, dark blue) in a neutral environment (mostly white and light brown). Neutral colors such as these do not evoke strong emotions and tend to be perceived as bland and tame, adjectives that can also be applied to one’s persona. This part of one’s psyche will do everything it can to follow society’s expectations, and that includes being harmless and fitting in, becoming neutral. The color palette starts to change in the following scenes. In the one with the mirrors, in which the infinite RMs represent his infinite personas, the neutral colors of his clothes are maintained as warmer tones begin to appear in the background. His persona is starting to be influenced by something else. The next time we see the schoolroom from the beginning of the video, it is destroyed and with strong red and blue lights on the background. RM’s neutral clothing is substituted by a colorful coat and neon green shoes. His persona is not in that room anymore, we can see the person behind the mask and the different aspects of his personality. With red representing his shadow, and blue and green, his ego. In the last scene of the video, RM is back to the neutral hues. He wears a full white outfit, but there are touches of color on him and the background. He wears a green necklace and stands in front of a coral fabric. The shades are not as aggressive as in the previous scenes, indicating that as much as his persona is still a huge part of him, he is letting his shadow and ego show a little.

The video for Shadow uses darker colors than the one for Persona. In the first frame of it, Suga and six other men are wearing entirely black ensembles in a corridor with deep red-tinted walls and a blue carpet. These are the same colors used in RM’s destroyed classroom and indicate that we are seeing his true self. However, this Suga is quickly hidden behind a mirror and replaced by one wearing beige clothes, his persona has taken over.  In the next scenes, we continue to see Suga’s persona but now he’s in green and blue environments. In the video clips, green and blue are the colors associated with the ego, the use of so many scenes with them show that Suga is more in contact with his ego than RM, but that relationship has not reached a balance because he has hidden a fundamental part of it: his shadow. In the last sections of the video, Suga’s shadow reappears and red becomes the main color of the lighting scheme. This time, his shadow takes over and the instability of the persona/shadow/ego relationship breaks his ego.

Ego’s video clip is much more colorful and uses many more scenarios than the two previous videos. This indicates that J-Hope is not trapped by any aspect of his personality and is able to live freely. Neutral tones, reds, greens, and blues all appear harmoniously but with the addition of a new constant color: yellow. Bright yellow is often associated with the Sun, with happiness and exuberance. By mixing yellow and blue (another constant color in the video) we get a solid green shade, different from the ones shown in the videos of Persona and Shadow, which tended more to blue or even neon.  This shade of green often represents nature and balance, which is the state in which J-Hope finds himself. In the latter part of the video, he is in a green room looking at himself in the mirror, there are no multiples of him or cracked images. He is able to face himself and accept him as he is. Right after that, J-Hope enters a dark room in which the lights keep changing from red to green, and through its door, we can see the same coral color used in the Persona video clip. J-Hope is able to find harmony between his persona, his shadow, and his ego.

As shown by this analysis, colors have an extremely important role in telling a story. The art and production design crew of the three videos did an excellent job in choosing the colors and incorporating them in a way that enhances and connects the narratives without compromising each video clip’s visual identity. Each media can be appreciated individually, but seeing them together and understanding their connections makes the experience more fulfilling as we notice the thought and care that was put in each of them.

Thais Stephannie Freitas Silva is an EFL teacher in Brazil and is currently majoring in cinema.