Words are rendered visible in some BTS music videos. These words include English, Korean, and/or Chinese. I propose to share the thoughts and feelings we get towards these words we see in BTS’s music videos in the light of typography, the art of arranging letters and text that makes words not only legible but also visually appealing to the audience. To be specific, what sort of emotions or specific messages do we get from discovering words in view of typography that involves font style, appearance, and structure?

Based in Oxford, I conduct research on visual culture and make art. 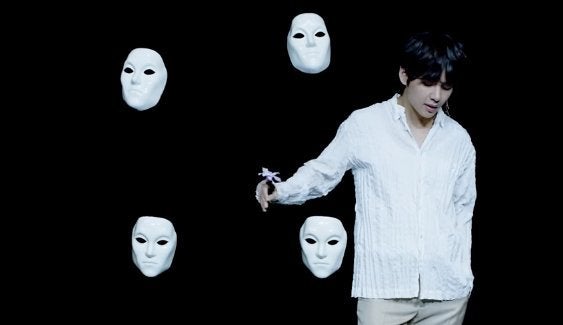 “The impact of supergroup BTS is presently being felt around the globe. Smashing records left and right, BTS has claimed an irrevocable and indelible space in the public consciousness as the face of K-pop and Korean soft power. Just as powerful is their legion of fans, known as ARMY. Unlike most common perceptions of fandoms, ARMY outstrips expectations of participatory culture by actively organizing itself across the globe according to the core message of BTS: love yourself.

It is this extramural, united sense of purpose that makes BTS and ARMY unique. Music groups and the publicity that surrounds them are often steered by the entertainment companies that initiate and drive their popularity. BTS is unique in that the reach of ARMY is unequivocally farther, faster, and fiercer than what BigHit Labels can wield on its own. As a result, ARMY has had just as much of a hand in crafting the image of BTS as the members themselves, if not more, through social media and activism.

This dissertation would explore how fandom and group intertwine to craft the coherent, unified mythos that is BTS and ARMY. The two are inextricable, co-dependent on one another to survive and thrive in a way that few other musical groups — K-pop or otherwise — have ever emulated. The Mikrokosmos (so-titled after a BTS song written directly to ARMY) coalesces as a result of both meticulous effort and ardent devotion to the concept, execution, and interrogation of what it means to be BTS and to be ARMY.”

I am currently in the process of formulating this proposal, selecting my objects of analysis, and deciding on methodology of research. I would appreciate any suggestions regarding source material (particularly as it relates to the smeraldo flower and its various appearances), as well as recommendations as to major contributors to fan theory regarding the BU.

All feedback is helpful! Diving into mythological thinking will be a first for me and I want to position BTS/ARMY appropriately. My academic background is not one founded on interviews or quantitative research, so any help in laying out a methodology for that would also be wonderful.

Dominique Brigham earned her MA in Cultural Analysis at the University of Amsterdam, researching the translation and adaptation of “Pokémon: The First Movie” from Japan to the United States in the 1990s, and has previously presented on the cultural impact of video games. Currently she works as a product marketer for the medtech company Siilo, where she writes on how healthcare professionals utilize communication technology in clinical settings. She is also preparing a PhD proposal on BTS, the ARMY fandom, their (a)political natures, and their joint and disparate impacts on global culture and social media activism.

Thank you for joining us for our text presentation on the benefits of ARMY events. We understand that this year has been challenging and many of us have had to adjust our plans given our current situations. In difficult times, it can be comforting to look back on happy memories and think of the things that bring joy to our lives. For the BTSPurpleLights team, hosting meetups, events, and projects for BTS ARMY in support of our boys has always been something we’ve enjoyed. Creating this presentation about the benefits of coming together as an ARMY team for special events brought back wonderful memories and excitement for the future. We hope that you will enjoy this presentation and find it useful to you as well in creating more happy memories and working with ARMY to support OT7 BTS.

Song: BTS Mashup by Goalsounds. Original songs by BTS, BigHit Entertainment.
No copyright infringement intended. All rights to rightful owners.
Song used for illustrative purposes. BTSPurpleLights does not claim copyrights to the song used in this presentation.

Photos by: Lexi H. & Oli_5 from BTSPurpleLights events (and our former fanbase events)

Although many attempt to explain BTS’ surge in global popularity by pointing to their social media use, grassroots fandom, and performance skill, there is a clear lack of focus on the importance of the storytelling found in BTS’ work, as well as the underlying influences from literature and psychology. If we are to truly understand BTS and their significance within pop culture and the global music scene, it is necessary to examine BTS’ narrative and its effects more deeply.

Throughout BTS’ conceptual journey from 2013 to the present, trials and anxieties are brought to the surface, contemplated, and resolved. Within their lyrics, music videos, and fictional Bangtan Universe, universal themes of wandering youth, school, temptation, love, and self-development are amplified by related themes seen in works of literature and psychology. These influences help BTS tap into a form of bibliotherapy, a creative art therapy that uses literature to promote healing. A close examination of BTS’ work reveals how BTS engages its fanbase with a cohesive cross-platform narrative that effectively helps fans explore their own anxieties and learn to heal.

This presentation, originally given at the BTS Global Interdisciplinary Conference at Kingston University in January 2020, interprets BTS’ conceptual narratives and themes within the context of works by Hermann Hesse, Carl Jung, and Erich Fromm. I also apply the theory of bibliotherapy to explain how BTS’ narrative succeeds in helping fans cope with anxieties and pain. To illustrate impacts on the fandom, I include data from a global fandom survey I conducted for this project.

The research survey used for this presentation has been opened for a second round. If you’d like to participate, please go here: https://rebrand.ly/btsandhealing

The survey is completely anonymous, and you can participate even if you participated in the first round! The data are being kept separately.

Additionally, if you’re interested in a more in-depth fandom survey that covers a wide range of topics, please visit: https://rebrand.ly/btsgeneralsurvey

Both surveys will be used to inform my future projects. Thank you for your participation!

Courtney Lazore is a writer/editor with special interests in BTS, Korean culture and history, language, gaming, and fan studies. She received her BA in History with a focus on East Asia and her MA in English before completing a four-year Korean language program. She currently serves as an editor for Revolutionaries Press and is a team member of @BangtanScholars. You can find her on her website, TheBTSEffect.com, where she posts writings and projects related to BTS and guides to the Bangtan Universe and HYYH Notes, as well as on Twitter @writer_court.

The music scenario in the world has become more diverse during the past ten years, with artists from all over the world providing impressive albums in different languages. One of the biggest music phenomena responsible for these results is the K-Pop (Korean-Pop) group BTS from South Korea, which has been the focus of a big spotlight in the western countries. Their songs have enchanted a huge number of fans throughout the world, a group that is known as “ARMY.” In order to maintain a relationship with their fans, BTS constantly delivers content to ARMY, such as photos, messages, and videos. This type of content is usually delivered on their social media networks, which include Twitter and Weverse (both of which allow the users to publish short messages, images, and videos), among other websites and mobile applications. However, most of their content is delivered in Korean, a language in which few people outside South Korea are fluent. Therefore, does the Korean language become a communication barrier between BTS and ARMY?

Cristina Freitas de Jesus is a Business student at Escola Superior de Propaganda e Marketing, a university in Brazil focused on marketing and entertainment. She currently works at Sony Music Brazil, and is responsible for the marketing strategies of the company’s international artists in Brazil, such as Beyoncé, Harry Styles, Camila Cabello, Monsta X, and Kang Daniel. Recently, she began working on academic research, mostly focused on the K-Pop music market and its disruptive results through the western countries.

BTS Montreal wanted to do more than just be active on social media. They wanted to reunite ARMYs in the city of Montreal and surrounding areas. To make new friends and enjoy all things BTS together. They created this community just like many have around the world, so ARMYs in Montreal would feel less alone. They started making events in 2019 and are still actively doing events online and offline with one goal. To inform, unite and spread the word for ARMYs. Ever wanted to enter an escape room that was all about BTS? BTS Montreal created an online escape room for ARMYs in Montreal and around the world to celebrate BTS’s 7th anniversary. Enter the different eras and see what will happen next. Have you ever had a dream? Maybe it has become reality with 7: The Escape Room.

As we grapple with the apprehension of a global pandemic, and while individuals experience their own neggative events, it is sometimes hard for ARMY to find humor and the energy to laugh. This talk is a perspecktive on how ARMY, specifically “the BTS Chicken Account,” plays with humor, remixing, and puns to inspire ARMY to geggle in the face of reprehensible publications and challhenging times. Specifically, this talk (poster or exhibit) will discuss how ARMY shenanigans on social nestworking sites can help boost fan community morale while supporting BTS through chick and thin.