The Map of The Soul era has brought a whole new universe with it and the psychology aspects running deep in the MVs got all ARMY theorists thinking… even harder! Jessica will help us understand the different archetypes and we will deep dive into Persona, Shadow and Ego MVs. Selene will give us her ideas and theories on how Jungkook and Taehyung can be key in the main BU story. We will wrap up this session with an open discussion on theories for what’s coming next in BU.

Now that we have gone through the stories of BU, let’s try to understand what all of this means. Callista will explain to us the idea behind The Hero’s Journey and how it connects to BU Jin character. Sarah will give us a deep dive into her interpretation of Black Swan’s storytelling through the MVs. Together we will also have an open discussion on the Wings era, with Hermann Hesse’s Demian and the Short Films related to BU.

From the ARMY Theorist society (@army_society)

Let’s take a look at the different pieces of this huge puzzle that BTS Universe is. Together with Courtney, we will walk through the contents in the MVs, the Notes, the Smeraldo Blog and the Save Me webtoon. We will also check other parts of BTS Universe that are different in terms of storytelling and Angela will share with us her particularly moving view of Spring Day among other ideas. We will finish this session with an open discussion about how the different BU stories are weaved into the MVs. 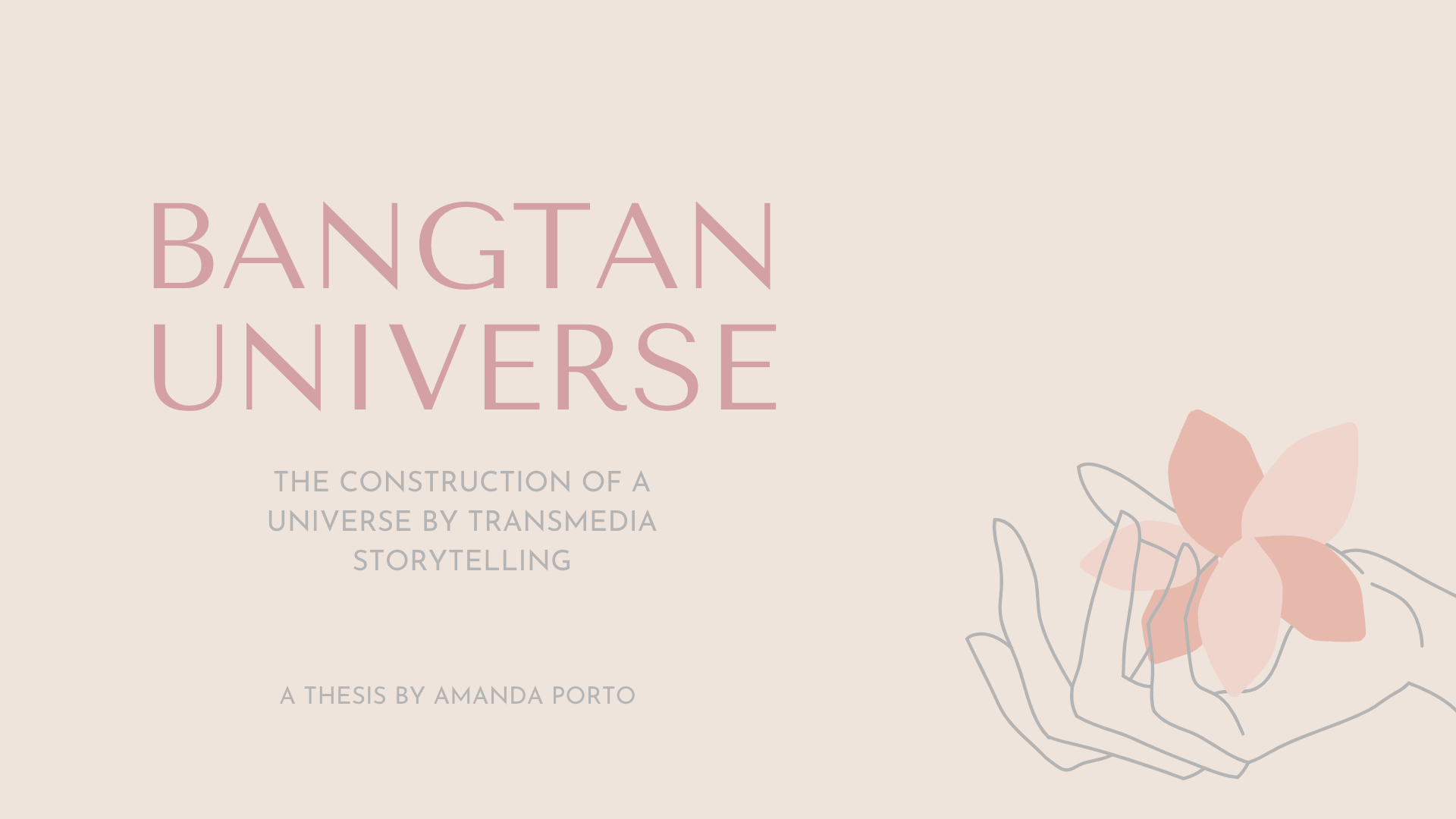 At a time when collective intelligence is on the rise, the viewer has as powerful and decisive media power almost as large as companies, being able to take control of different media platforms. The transmedia language appears as a way of telling a story through these different media, with contents designed for each of them in order to complement each other for the best performance of the whole. The analysis performed here regarding the Bangtan Universe seeks to explore a transmedia narrative that has expanded from the video clip to other platforms, such as short films, books and comic books, highlighting the influence of fans in this narrative as well as tracing the method used by the band in expanding this universe to its different media.

Being popular, mainly through films, books and series, the transmedia storytelling proposes a new way of relating to the products created by large communication companies, directors and writers. By dividing diverse content into different media, where they all bring new information about a universe, the knowledge is complementary and converges. The research sought to unite the concepts of transmedia storytelling with the analysis of the language expansion of the fictional universe created by the South Korean pop group BTS, which after the launch of the quadrilogy of music videos “The Most Beautiful Moment in Life” in 2015, continues today to launch products from this universe on different platforms. Doing something completely innovative for the music scene in the world of K-pop, BTS uses the tools of transmedia to his advantage by expanding a fictional universe from his music videos to several other platforms and media, such as short films, texts, books and comics.

The case study of this transmedia portrays a media that has expanded from BTS music videos (Bangtan Universe) to other platforms. Henry Jenkins and his study in “Convergence Culture: Where Old and New Media Collide” were used and approached as the main author for dialogue, with Jenkins being one of the most important scholars in the area of culture of convergence and transmedia storytelling. An analysis of the concepts of the transmedia storytelling established by Jenkins was carried out, to later trace the positive points and those that were addressed and used in the construction of some other transmedia narratives, to finally arrive at the analysis of the Bangtan Universe.

Initially known as The Most Beautiful Moment if Life series, Bangtan Universe is a fictional multimedia South Korean universe, centered on a series of video clips released for the The Most Beautiful Moment in Life album trilogy between 2015 and 2016. With its events taking place in the year 2022, the Bangtan Universe officially got its name in 2017 and had its expansion into short films, books, webtoon and small booklets.

The clip for the song I Need U moved a large number of fans who, surprised by the events they saw in this new approach by the audiovisual product group, started to join on the internet to discuss the lives of the characters featured in the short film and to look for hidden messages in the two released versions. The music video for Run, the next single, drew more lines and wrote a little more history within the same narrative and the universe built in I Need U, in addition to making fans curious about the new theories presented.

The Bangtan Universe begins with short films, aimed at YouTube platform and being analyzed from the perspective of video clips for promoting group music. In sequence, a series of short shorts is released that translate the concept of the WINGS album, which came just after The Most Beautiful Moment in Life, where fans managed to fit the whole concept and context of these very short into the logic of the BU universe.

The Bangtan Universe success story is not due to an isolated event, but to a series of factors that contributed to its solidification as a narrative. The company’s commitment to a more complex and profound history, the growing increase in the group’s popularity in the country of origin, and later abroad, and the use of social media, whether by the group or by the fans, can also be seen as strategies that will yield motivation and long-term engagement. Finally, it will be important to reflect on the real need of the layers of your universe and how to use them in order to get the most out of this platform. The fact that Bangtan Universe achieves good performance on different platforms, such as the case of the webtoon that attracted comic book fans not previously connected to the universe, does not negate the public’s participatory intellectual demand for a complete understanding of the story.

It is possible to analyze that the construction of this universe, which began in 2015, was thought and elaborated to be developed over the years. The Bangtan Universe already has more than five media platforms, with plans to expand to two more, and the performance on each of them has proved a success, with each platform being able to establish itself in a way

independent. The perception of a new way of making transmedia storytelling, which continues to be explored in Bangtan Universe attracts not only fans of the group, who today is establish as one of the biggest fandoms on the internet and who manage to generate engagement and topics for prolonged discussions on social networks. But it also attracts those who have an interest in the media explored individually, making it not necessary to have an interest in the musical content of the group to understand the BU. The connection between all of the media is profound, with clues and subliminal messages spread throughout all of the records already published about this universe. The non-chronological order of events in the universe requires time and dedication from fans for a deeper understanding of the facts. This makes the experience richer and more interactive, differentiating itself from other ways and strategies of producing and consuming a transmedia narrative.

Based on observations and personal considerations, a method used by the group was observed, consisting of:

*This is a short version of the thesis.
*This thesis was presented and defended at the Faculty of Cinema and Digital Media at IESB, in Brasilia/Brazil in 2020.

Amanda Porto, graduated in Cinema and Digital Media from IESB, I am 23 years old and have been working since 2017 in the area of cultural production and art direction, with recognized works in the area of storytelling and editing. My final thesis at college was a case study of the Bangtan Universe from the perspective of transmedia storytelling.